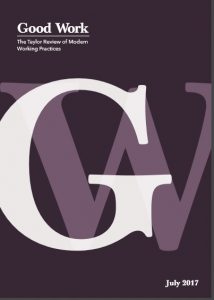 The HR Dept has been calling for a long time for a simplification of employment status, to protect rights and ensure that business owners do not fall foul of legislation due to ignorance, confusion or bad business advice.

Like many, we have witnessed the blatant circumnavigation of proper payment and treatment of people, as new technologies and platforms enter the market. So we are glad to see Mr Taylor recommending fair treatment of all ‘gig workers’, suggesting the same benefits as workers under the new ‘dependent contractor’ status. This is especially important for those who have had no real choice as to their employment status and where they are not running their own business. SME owners will be pleased to hear reassurances from the Prime Minister that the implementation of these recommendations will be free from overbearing legislation.

As a provider of HR advice and support to SMEs, we are concerned about how the rebranding of employment classification of worker to ‘dependent contractor’ will impact smaller businesses. Confusion is already rife and while the new definitions may solve the ‘gig economy’ problem, an unintentional result could be further lack of clarity for small business owners, with more loopholes and grey areas for the unscrupulous to exploit.

Whilst we applaud the sentiment behind a statutory requirement to issue employees and ‘dependent contractors’ with a written statement of their rights within a day of starting their contract, in reality this will be burdensome for SMEs. Many owners are not aware of the current requirement to issue an employment contract within eight weeks and often fail to do so. The new proposal, therefore, seems to be an unrealistic expectation which could leave well-intentioned employers falling foul of the law. Employers will also need to understand that contractual terms for an employee and ‘dependent contractor’ will require different forms of contract.

We also have several concerns regarding the new definitions for employment status. Firstly, what will be different in practice by rebranding worker status to ‘dependent contractor’? The confusion will remain! The practical difference would seem to be the way that these bands of workers can get a higher minimum wage, or a different way in being paid via piece rates. But there is huge concern about how in practice this will actually work and be enforced, and how it will impact SMEs.

The report also recommends primary and secondary legislation, to define the characteristics of the employment status to ensure clarity in the law. This would be a welcome step.

Secondly, there needs to be some consideration for those who actively choose to be self-employed. Many freelancers, for example, currently don’t have a genuinely unfettered right to provide a substitute and are in effect providing a personal service using their own skill – under existing law they wouldn’t count as truly self-employed yet it suits them and the employer to be so.

So, whilst they might not work under the employer’s control and supervision, how will these people be classified? The Taylor Review’s report welcomes ‘two-sided flexibility’, yet freelancer relationships currently don’t comply with this and are constrained by providing a personal service. What will happen to them – will they become dependent contractors or remain self-employed?

There are a great many sectors engaging such individuals on a self-employed basis. We and many SME business owners would welcome a re-classification of some form of ‘two sided flexible self-employment’, to ensure that they do not by default get trapped in ‘dependent contractor’ status. This would have significant implications for SMEs.

There is also the question of what, legally, will differentiate the new dependent contractor status and that of self-employment? Will the three key tests of control, mutuality of obligation and substitution remain relevant?

And what will happen to those forced into self-employment – those who are regularly providing service to a company but not typically through mobile apps? Cleaners, for example, who are not running their own businesses. Presumably, they will be regarded as ‘dependent contractors’ – in reality they were always technically ‘workers’ but their employers have either not been aware of this status or have chosen to avoid it because of cost implications.

Finally, and perhaps most significantly, we would be concerned that this whole exercise may simply be a rebrand of the status quo if there is not significant progress or enforcement made.

At the recent Parliamentary Inquiry into the Future of the World of Work, we recommended abolition of worker status as a way of simplifying definitions of businesses and protecting the rights of all employees.

Indeed, the Inquiry’s scope seemed to be broader than this Review set by Number 10 and we are hopeful that the new Business, Energy and Industrial Strategy Select Committee pick this work back up when it reconvenes to add to Mr Taylor’s conclusions and be considered by Government for action. If Mr Taylor’s findings are focused primarily on gig workers then significant concerns remain about the wider issues, such as the sham of false self-employment, where people are forced into a certain status and subsequently exploited.

Similarly, as outlined above, the new definition could mean that those who may choose to be self-employed freelancers could be caught up in ‘dependent contractor’ status against their will.

Whatever action is taken by Theresa May (if indeed she is successful at getting legislation through Parliament with a minority government), there is going to have to be very clear guidance, communication and education for business owners, especially those in the SME sector, if the recommendations are implemented.

The online tool recommended by Mr Taylor will be a good first step but must be backed up by correct and professional advice. Change is needed to employment status and the current situation is not fit for purpose. But it will be the large scale implementation of change, alongside education of business owners and their ‘trusted advisers’ such as accountants and bank managers, that will be critical. Otherwise we will end up with even more confusion and ignorance than we have now.

We remain concerned that SME voices have been lost in this review in the rush to solve a problem for the ‘gig economy’ big businesses.

What do new customers think of our HR services in 2018?